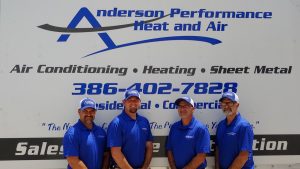 Our crazy weather and temperature fluctuations in Florida call for not just cooling, but heating too.
Granted, Florida summers can be hot, oppressive and seem to last forever. In actuality, the summer
here is around four months long, from about May 20 th to September 20 th , when the average daily
temperature is above 85 degrees. The hottest time of year here is typically mid-July, with the average
high approximately 90 degrees and the low about 75. Our comfort level at that time is largely based on
the dew point/humidity. In Florida, muggy days are often followed by muggy nights, with the muggier
period lasting mostly from May to November and with August claiming the prize for muggiest month.
Winters in Florida are considered to be the three months of December, January and February, with the
average daily temperature rarely reaching 70 degrees. The coldest Florida winter month tends to be
January, when temperatures can average a low of around 45 degrees and a high around 65. If you’re
from up North, this may not bother you, but as a full-time Floridian now, can I just say, “Brrrrrr”?
Lucky us…but in all seriously folks – lucky for us, Anderson Performance Heat and Air addresses both
cooling and heating effectively, professionally and affordably. Anderson Performance Heat and Air is
fully committed providing heating and cooling service, repair, scheduled maintenance and installation of
heating and air conditioning systems without delay.
With temperatures that fluctuate mainly between 45 and 90 degrees and sometimes beyond, you need
reliable, experienced cooling and heating specialists you can trust to get the job done right…that’s
Anderson Performance Heat and Air – serving commercial and residential locations throughout
Edgewater, New Smyrna Beach, Samsula, Daytona, South Daytona, Port Orange and Oak Hill.